the little man of the house has reached the 4 month mark!  he is laughing and jumping and making sounds . . . and sucking the life force out of me!  don't get me wrong, cause i love my little dude way more than i ever thought possible, but he is an energy drain like i have never experienced.  and these days he is learning to play, which is seriously infringing on mommy's creative time.

so i have been absent as of late, and i do apologize.  i've been putting some time into etsy and promotion there.  i have also started pushing christmas orders and they've already started coming in!  oh, and did you know halloween is next week?  yah - so i've been toiling away on pumpkins and costumes and and and.  breathe.

tonight i finally finished fixing my headband model pics.  my little girl has been my model for, well, ever.  she's getting a bit more attitude about helping me out with this so it's taken a bit more bribing this time around.  alas, i bribed, she posed, i photographed, and here they are: 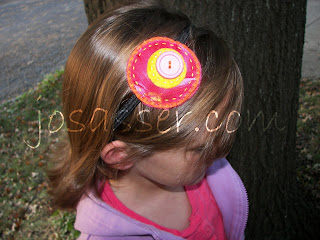 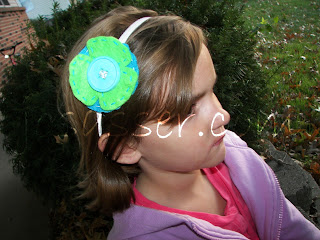 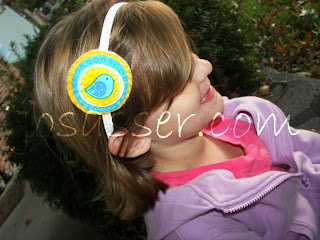 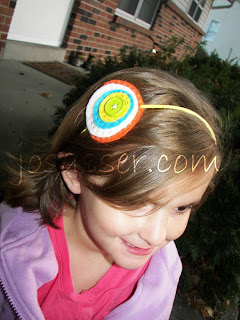 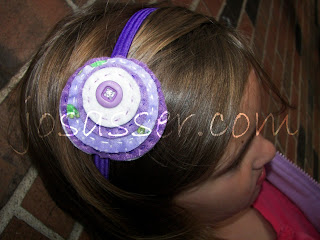 it's dinner time and i gotta get crackin'.

where does it go?

i do not understand how i have whole days that simply disappear.  what did i accomplish today?  anything?  geez.

today i did spend a bit of time working on a bulletin board for my daughter's school.  i signed up to be a room mom, and while there are 3 other room moms for me to be working with none of them seem to be stepping up to any of their responsibilities.  so there's this bulletin board that each grade gets a turn at and october is our turn.  yes - october is half gone.  i had hoped that with all the craziness that october has brought me that somebody else would have taken this on.  i'm done complaining, i promise.

so i've been preparing to put this bulletin board up, but you won't get to see that until it's done.

i made these as an experiment in embroidering on paper: 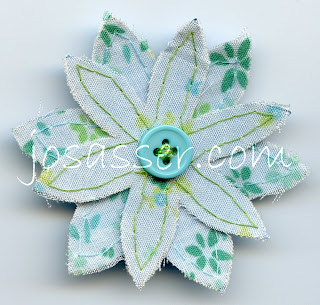 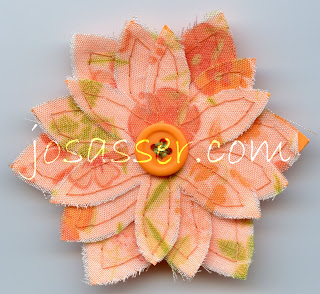 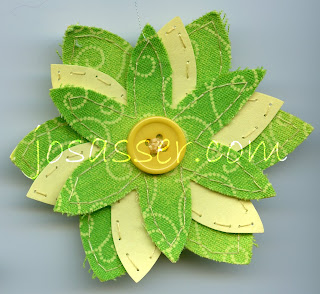 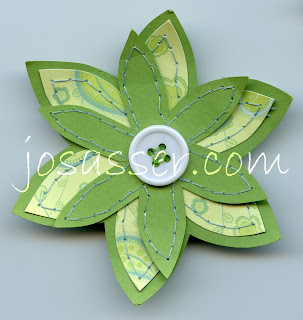 i have since turned them into brooches - soon to be found in my etsy store!

it's been a long day.  see you tomorrow.

wow.  a weekend of sheer exhaustion.  if there were no children in this house i imagine i would still be asleep, but if i had no children i doubt i would be so tired.  hmmm . . . children both cause tiredness and prohibit sleep.  who came up with this?

it is unseasonably warm in st. louis right now - shocker!  st. louis having weird weather - who'd of thunk it?  so all my adorable matching family outfits for the 2 weddings this weekend didn't happen.  i'm still bitter, but perhaps they will be even more awesome at thanksgiving.

i have recently taken up a new craft - knitting.  it is one still that has long eluded me and i have completed a hat and a scarf in the spare moments i've stolen since thursday.  i am quite impressed with myself.  i'd love to show them to you, but i wanna make them a bit more special and awesome before i show them off.

so today i've fished around and i've got one of my all time favorite drawings to show you. 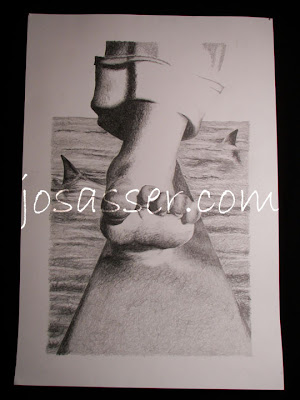 balance detail
this is another example of my scribble drawing style.  i don't know if there is a straight line in the whole picture.  i don't recall the exact measurements, but i'll guess it at 22"x36". 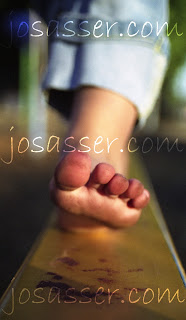 i've always thought that my little headbands were a little, well . . . boring.  it appears that i am mistaken.  at the art walk this past weekend they were an oober-hit!
don't get me wrong - they are cute.  even cuter on the right little (or big) head.  i try really hard to come up with new designs and to make each one totally different.  i think that makes them tiny, wearable pieces of art instead of just accessories.  anywho, here's some new ones: 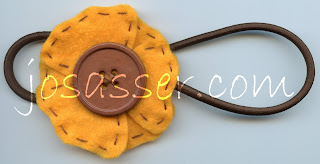 this one is already sold.  apparently somebody else thought it was perfect for fall, too.

this one is my favorite.  if it hadn't sold i would probably have made it mine by now.  this shade of blue is one of the colors i used in my wedding, so it is dear to me.  i used french knots instead of plain stitches on one of the circles - i'll be using that little embellishment more in the future.

i'm gonna get cracking to recoup my headband inventory before december, cause i am wiped out!

this weekend is a bit insane for us - 2 weddings and a rehearsal dinner in 3 days!  i'm sleepy just thinking about it.  don't be surprised if i am scarce the next couple days.

oh! and the featured artist questionnaires are ready and some have been distributed.  that means you'll be seeing those posts soon!  i can't wait!

i've been working hard on making my etsy listings.  items will be added to my shop slowly, so keep checking back if there is something you are looking for.

today i want to introduce you to wanda. 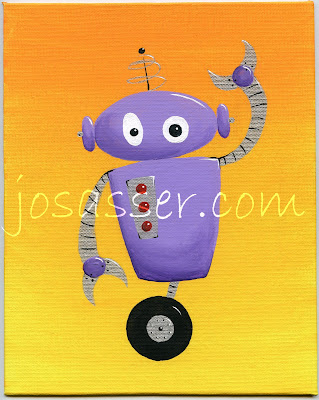 i started with this lovely orange background and no idea of what to do with it.  i've been having a love affair with purple lately, but wanted to do something fun.  so, what better than a purple robot?!?!  wanda is pretty awesome, if i do say so myself.

you can pick her up now in my etsy shop!

today i wanted to show you some things i worked during my blog abandonment.  in a previous post i showed you some felted balls . . . err, beads(!) that i had made, and here's the final product: 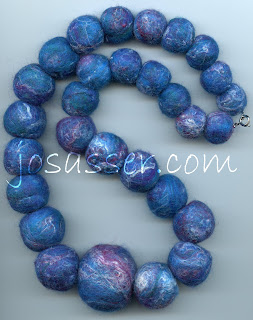 and a few others that i felted and strung in the past couple weeks: 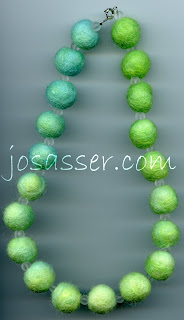 the left one fades from blue to green as it goes around, which i think it so totally cool.  there are little clear/frosted beads between.  the purple on on the left is pretty enough that i am considering keeping it.  there are glass beads on that one.
the wool that i bought on etsy for the green and purple ones felted like a dream.  i need to track down that seller and buy her out!
these beauties will be making their way to etsy soon.  as always, if you are interested in buying something just shoot me an email and we'll set you up!
jo
Posted by jo sasser at 12:39 PM No comments:

if you've been following along you will recall my post a few weeks back, titled 'sidebar', when we discovered a butterfly cocoon on our house.  then, moments later had a caterpillar come and visit our cocoon.  Here's a pic i took of our visiting caterpillar with his friend's cocoon in the background: 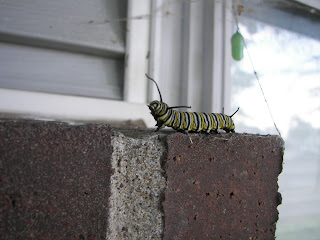 he was quite the model.
well, i did not realize, but my little girl caught this caterpillar and put him in her bucket.  *disclaimer* we have strict rules about critter capturing, but this guy was able to climb the side of our house, so i doubt an open bucket would have caged him long.  she but a stick in there so he could climb out and a few leaves to munch on.
the next day we found that this caterpillar had made his own cocoon right inside her bucket!  i am completely regretful that i did not photograph this second cocoon, but it looked exactly like the first one, on our house.  since he decided to stick himself in such a portable location we decided to take him up to the school and show her class.  it was pretty awesome to be able to show them photos of the caterpillar, and his cocoon.
about 3 weeks after we discovered the cocoon on our house that butterfly escaped.  i assumed that our bucketed friend would soon follow suit, so i got a little net and covered the top of the bucket.  yes, yes, i realize that this means he was trapped in there, but we just wanted to see him before he flew away.  not two days later i found this: 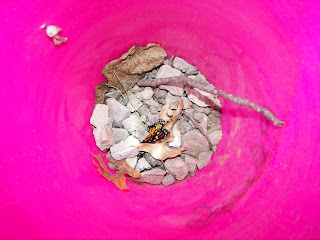 you can see the vacant cocoon on the side of the bucket and our little friend on the bottom.  his wings were all curled up, still, so he wasn't prepared to do much flying.  i put the net back on and took him up to see the kiddos at school again.  when we got back i did some reading and found out that monarchs eat juice from oranges, among other things, so i threw some orange bit in there and put the net back on so that my little girl could release him when his wings straightened out.

we left him in there all day, but his wings were still curled, so we released him just the same. 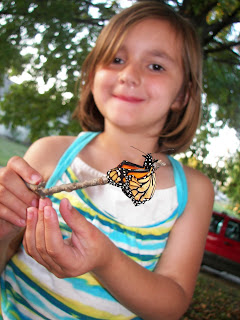 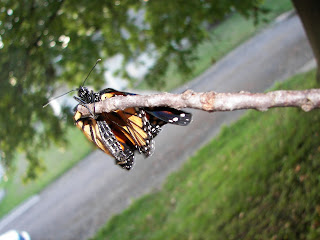 he is such a looker!

i hope that he is doing well, wherever he is, now.

see.  i promised that i would return today and i have.  slowly trying to regain my good blogger status.

i had a lovely day at the art walk yesterday.  it was cold, and at times rainy, but people came out anyways and patronized.  i also got to see a lot of friends, which is one benefit to doing a show in your home town.  success!  for those of you who missed it . . . 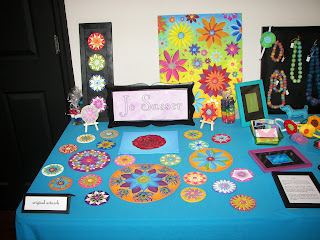 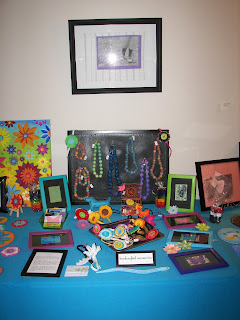 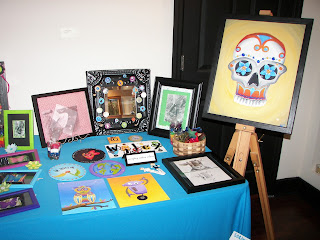 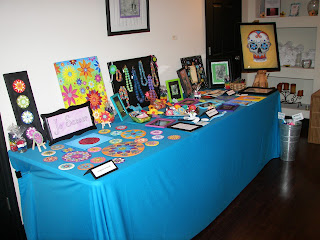 i forgot to put my small white tablecloths over the blue, and realized after i was nearly done setting up!  everything looks so much better on white.  i have come up with a few other ways to improve my display in the future: thinner tables so everything can be reached, more signs/explanations, title cards/sizes/prices of paintings displayed on fronts, frame all the paintings, etc.  i also noticed that at this particular walk people were more interested in jewelry and accessories than actual art.  most of my customers were children, which is fine, because they were doing the walk, too, and most art is not for them.  i am happy to cater to a younger demographic.
so, what's next?  i have a craft fair in early december, and otherwise i will be posting on etsy!  i'm going to try to get my airbrush studio going, as well.  oh, and i have some very cool new stuff to show you, so just you wait.  also stay tuned for featured artists, new projects, and my first giveaway!
calm down.  i can tell you're excited,
until tomorrow.
jo
Posted by jo sasser at 10:47 AM No comments:

i'll be right back

i know, i know.  where have i been?  i hurt inside when i think of how i have neglected this blog in the weeks past.  but it will all be over tomrrow.

tomorrow is my showing at the local art fair and then it will be my glorious return to my poor, neglected blog.  i have so many new lovelies to show you and there will be massive additions to my etsy shop.  i know you are eagerly waiting.  only one more day - i promise.

some of you might be reading this having just seen me at the art walk - hi!  i hope you'll stick around and take a look at some of my stuff.

jo sasser
grew up in a small town next to a big town, and i'm still here. wife to an amazing husband, and mother to two rockin' kiddos. an artist . . . hoping to make it in this world doing what i love to do.